The courtyard has been the main festival theatre of the Familistère de Guise since the 19th century, and is now exceptionally used for live performances or the presentation of large works of art for temporary exhibitions. It is generally left in the striking nudity of its architecture, animated only by the movement of the inhabitants and the public, by the light projecting its shadows on the ground and the façades, and by sound or musical sequences that seem to be emitted by the building itself.

With its 60 loudspeakers, the Cour sonore is a intrinsically imaginative device for emitting sounds into space, which uses the courtyard's ventilation system to diffuse a generative sound programme designed by the composer Jean-Christophe Desnoux and produced by the sound designer Manuel Poletti in 2010.

This system encourages musical creation: every year since 2017, the Familistère has invited a composer to let himself be inspired by this atypical place to create a piece that will be produced by Music Unit. Thus, after a public inauguration, each new creation is integrated into the sound continuum of the Court, which represents a unique and evolving musical repertoire. 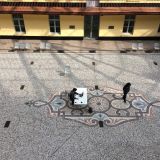 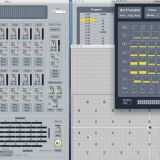